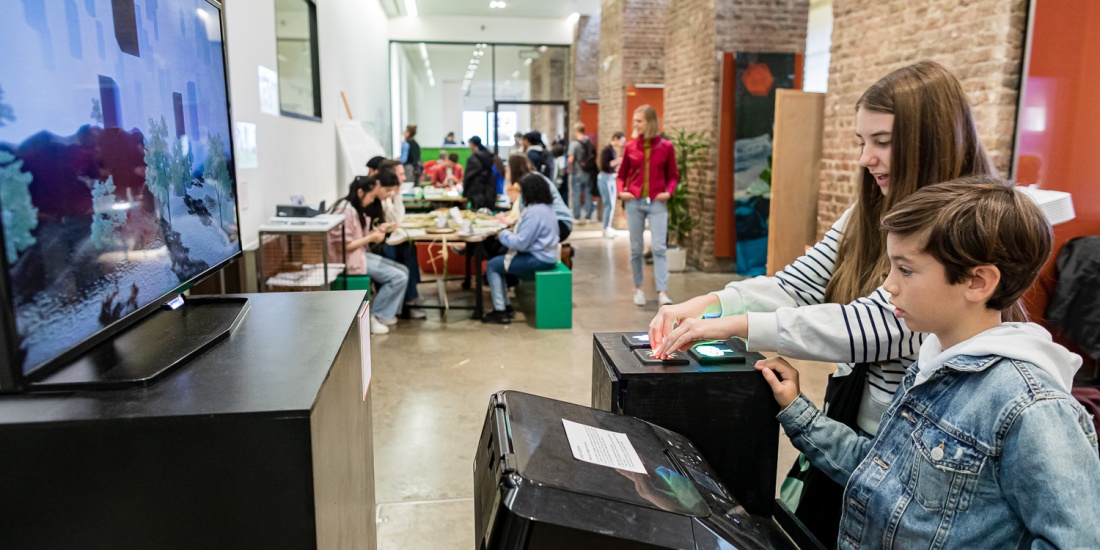 Before the old academic year ended, the new one started it seemed. I was fortunate enough to have my work chosen to be exhibited as part of the Digital Design Weekend at the V&A, in its event for the London Design Festival, I took an Internship at Jason Bruges Studio, and was also nominated for the Emergency Exit Arts Prize. And at some point I went to Bristol.

The experience at the V&A was a great privelage, and it was gratifying to talk about my work with so many people and glimpse the works by other exhibitors, even if the experience was exhausting.

The circumstances of cleanup following Sub-Systems, especially with regard to the Hatchlab, meant that I had to quickly take my PC to my studio, to work on the documentation hand-in while the hatchlab was closed, before bringing it back to Goldsmiths to work on my project further and be prepared for transport ot the V&A.

My piece Steward was held together by tape and cardboard when showing in the church and I knew that this arrangement would not survive the journey to South Kensington. As such, I lasercut a new interior and reworked the system of power connections top the various electronics in order to build a more robust system. This was definitely a success (though one of the buttons did break in the the corner), but with the organising of vans, site visit, ordering of new postcard blanks and purchasing of printer ink, there was little time left to catch my breath after the academic year.

And this relentless pace was continued as immediately after taking our stuff down from the V&A show, I started a two week internship at Jason Bruges Studio. I had been determined to try take advantage of any opportunity that came my way on the course and when this internship was mentioned, I knew it would be prudent for my professional development to apply.

It was a rewarding experience. I would like to thank Math for allowing me to shadow him, and Joel for his endless patience in entering techdesk passwords for me. The work was performed in the Grasshopper node-based scripting system for the Rhinoceros CAD system. I had a minor familiarity with Grasshopper, having started to learn it a few years ago in preparation for a job that dematerialised, as did my free trial of Rhino, and thus my interest in Grasshopper.

This whirlwind dropped me straight into the second week of term, the first week having been taken up with the internship. In critical studies we engaged with the topic of AI and Bias.

Biases are inherent to any technology such as AI where decisions made in the architecture, weighting and data collection for a model all provide opportunity for (intentional or otherwise) strategic unfairness in the interpretation of results.

However it would be wrong to say that this deligitimises those models or results. By examining the situated biases, in the way Donna Haraway suggests applying to knowledges, we can locate the voice of those collective biases and examine the results produced by an AI accordingly. To do otherwise, to attempt to mitigate or correct for negative biases, we flatten the possibility of a multiplicity of voices.

We took as a lens for this line of argument, the work of Holly Herndon and two of her creations / artificial collaborators: Spawn and Holly+. Holly’s creations are both synthesised voice models, trained on a limited and biased dataset. Spawn was trained on Holly’s audiences and Holly+ is trained only on Holly’s voice. Here, the artistic experimentation at play isn’t just sound but the material of learning itself. This data collection for learning takes place in a ceremonialised ritual during Holly’s shows, further working the agency of the audience in providing the particular bias of what spawns from their input. Taken in this way, machine learning models can be considered as collections of space-time matterings.

Herndon talks of spawning in this way as a 21st century corollary of sampling, where instead of taking small samples of sound and re-using/re-interpreting them, we take the “spawn” of a sounds, e.g. the tibre of a voice/instrument and then forming this into the new desired outcome. She uses a spawn of herself, named “Holly+”, which is a model trained on her voice that can be used to sing pieces Holly herself never has such as in different languages that she doesn’t speak.

Herndon made an interesting proposition in her Ted Talk on the subject of Holly+ whereby she asserted that people could make music with her or even go on tour as her. But similarly created a division between her biological self and the artifical life of Holly+, conveyed when she says “I don’t speak spanish”. If Holly+ is her, is an extension of her, then she, Holly, can speak spanish, if it is not, then one couldn’t go on tour as Holly. There is a question about the identity of a diffuse personality created by such a computational augmentation.

Our Studio Practice module led a discussion around the concept of our ideal Post-Studio, Studio. To dispell the myths of the solitary male artist working alone in the studio and producing works of genius that then leave to be shown and adored. Paul McCarthy’s work “Painter” examines this myth through a satirical film.

In a group with Chase Young and Rosie Yuan, we hypothesised a commons-based “Forest Studio”, where all commoners, not just human, have a say and are involved in the collective decision making of the studio itself and how it develops. The nature around would influence the work that was made, as well as the food that is eaten, the behaviour of the human commoners and the layout/material/design of the buildings. This studio could act as a node within a greater collective of studios which could work to build a library of processes for living better and symbiotically in an effort to re-wild areas.

The three of us have also formed a group for the group project section of this module, with initial ideas to study neoliberal speech through Wittgenstein’s language games, the lens of colloquialism perhaps using machine learning to create a playable game as an outcome.