More fractals to start off here. Trying some new equations out, trying to create some different effects, the luminosity works well here, as does the sense of depth, but there’s not much “new” going on here. Below, we see a mountain, exciting with all it’s vibrant colours and spikiness, like a psychedelic Matterhorn (Matterhorn included for reference). 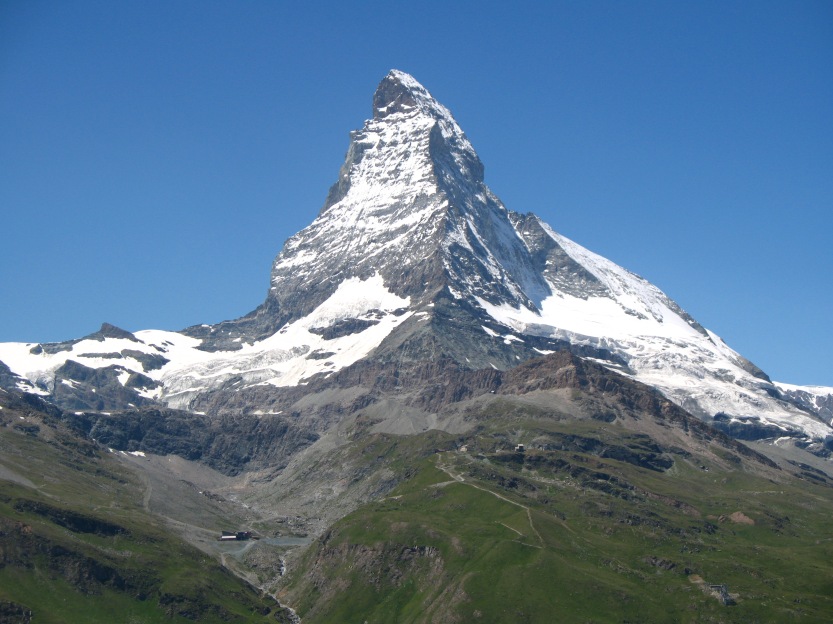 Not too dissimilar, at least in composition… But anyway, the point I wanted to make was that as fun as it is to play around in Mandelbulb, I have been feeling the call of Terragen much more. 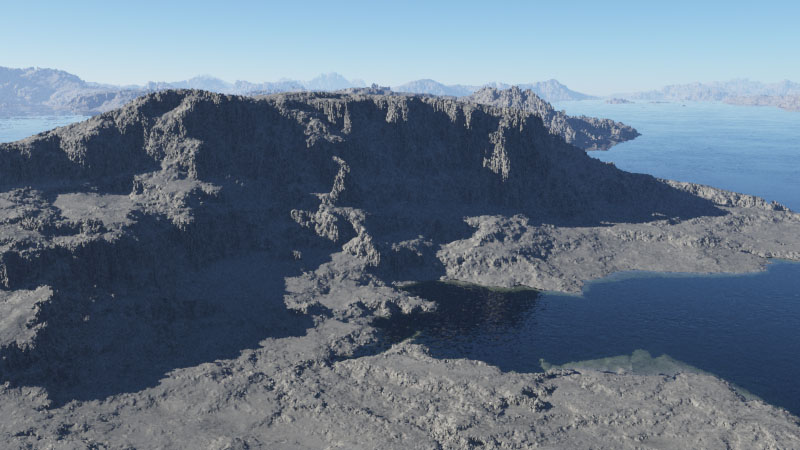 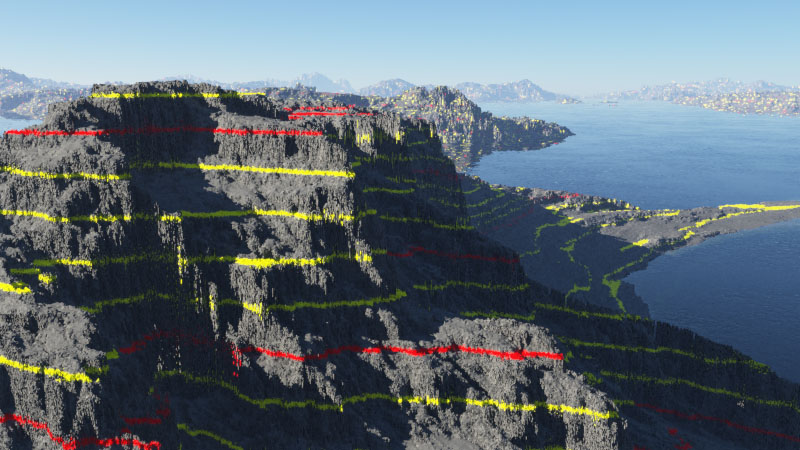 Here I have added contours, ostensibly maybe a tool for geographers and people trying to map out an area of land in a more scientific manner, but for me another tool to affect the colour/appearance and add a mathematical, artificial touch into the otherwise natural-seeming landscape. 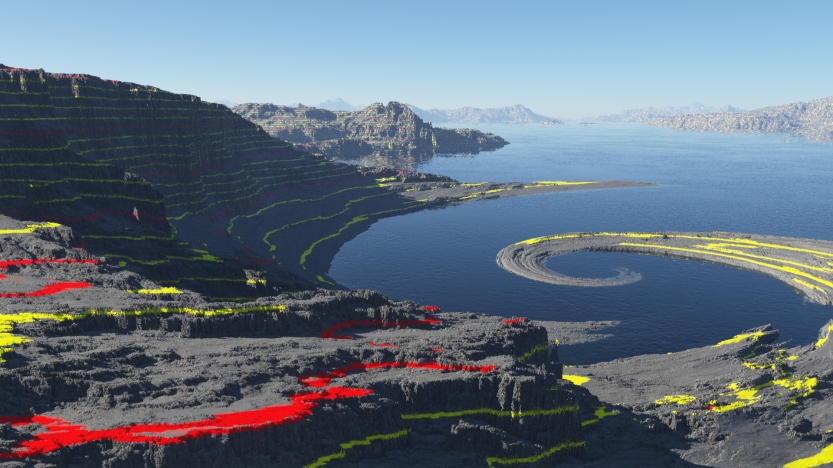 With the discovery of the “Vortex Node”, vortices were placed, amusement and confuse-ment was had, and then this appeared: A spiral Jetty-esque apparition.

First experiment into atmospheres, adding clouds above and also a low cloud layer, visible just in the middle as an unsatsfyingly wispy little thing. Some further variations made from this camera angle are below.

After these experiments I began trying to use a pre-existing image to create a terrain, similarly to how Joan Fontcuberta creates his work. My first attempts were highly unsuccessful. One of the troubles I had was the newness of Terragen 4 as software – there was very little in the way of tutorials or helpful guides made specifically for this iteration of the program. Eventually I realised how simple the process could be.

In order to create a terrain from a pre-existing image first you need to take that image into photoshop. Grayscale it, then save it as a .TIFF file. TIFFs are one of a few types of file Terragen can read for terrain. Next inside Terragen, create a new terrain – from heightfield, find your file and voila:

Notice how it’s the image from before? Yeah you did.

So I tried with this image from before. 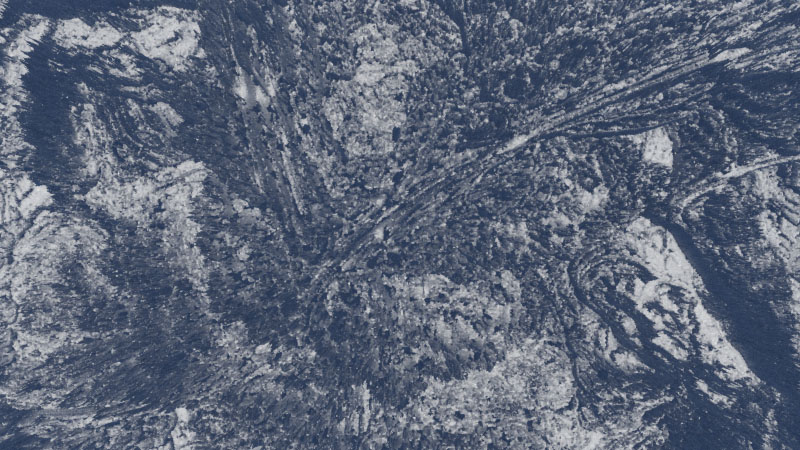 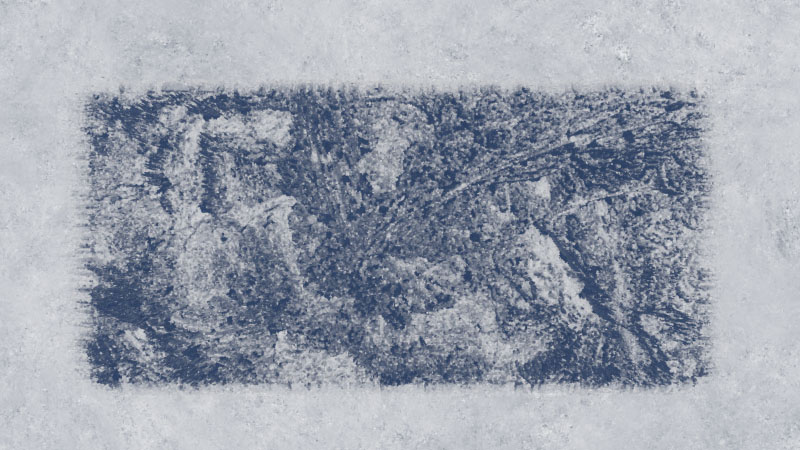 One of the big problems with straight importing a converted image in is the lack of gradient between terrain variations.

That creates these spikey forests that take a lot of time to render due to the complexity.

The way I have solved this is by blurring the image before you save it as a .TIFF and use it for the heightfield.

So I went through glitching some of the images made so far to see how good they look. 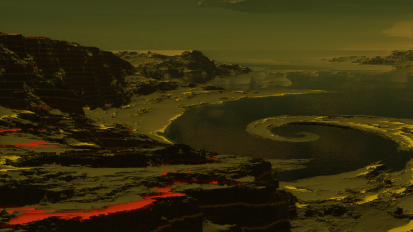 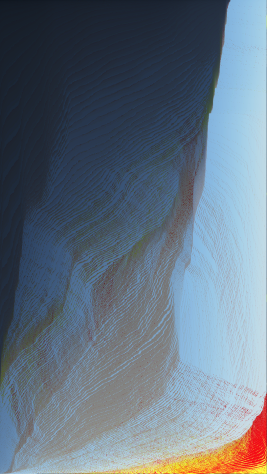 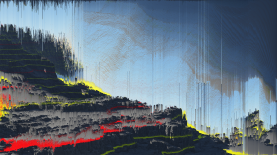 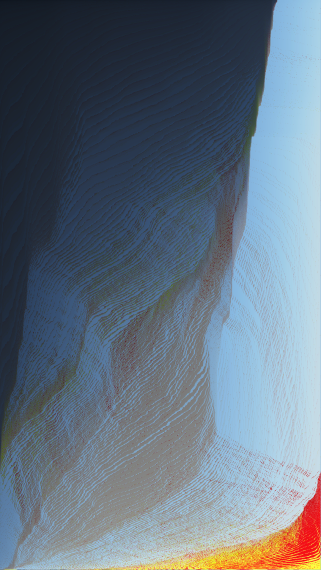 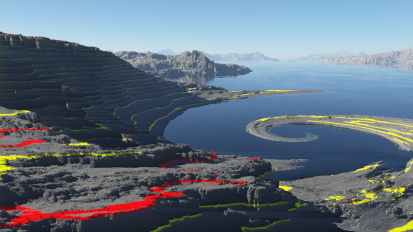 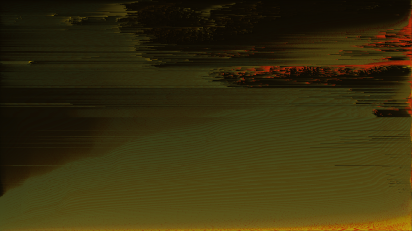 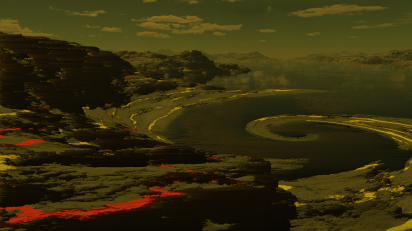 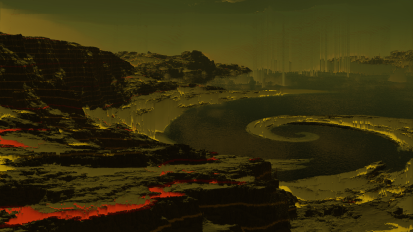 This one really stood out for me and seemed to get across everything I wanted. The unnatural atmosphere, the depth added by the cascading pixels almost making the water seem like a grand waterfall, but then it spills over onto the land in a way only a 2D image can. The cliffs look more menacing and the yellow provides a much needed highlight to counter the overbearing green.

I knew that I wanted work that had been made up until this point to take place in a show I am putting on with Dan Rowan-Smith. I knew also that this show would take place the week before the ‘Translations’ show on our course. I very much did not want to present effectively the same work in these two shows back to back. So I decided to make an animation.

The point of the translations show is to approach your practice from a different angle, this could be changing medium or exploring different ideas, effectively, like the territories of practices show last year it is a way to take the pressure off of showing work and to encourage exploration and experimentation even if it ends in disaster.

I believe that my work has rather heavily changed direction since last year – I haven’t been coding games and interactions here, I have been focussing on the environments themselves, ways to make them more interesting and how to create landscapes that offer a greater traditionality in how they can be seen and interpreted but incorporate new modes of doing so. 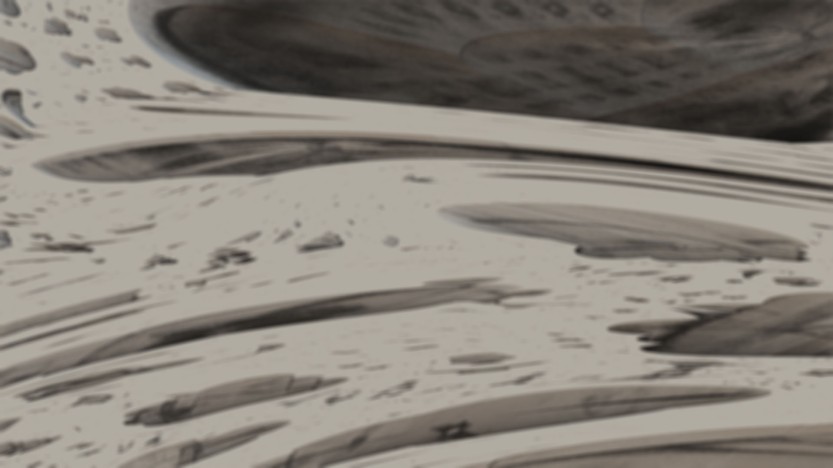 So I decided for translations that I would attempt to create an animation in Mandelbulb3D and Terragen and then use the fractal animation to create the terrain for Terragen that when sweeping through would present the start of the fractal animation again. The animation features of programs are usually ones that I have shown less interest in… Unity and Maya which I used last year both have animation features to them which I have not explored in any complexity. So I decided that with my new toys I would have a go.

Seeing the Paul Nash show at Tate Britain, and what I saw as an obsession with the frame within his paintings, I decided to try using a frame within my animated landscape. With this I would be able to utilise the different ways in which I make work, displaying different formats within the same composition using a frame as a new world.

In addition to the 16 hours combined total rendering time for the following 4/5 seconds of video, my computer refused to turn on leading to a very desperate hour trying to sort it out. Eventually after resetting the CMOS I was able to see my work again and continue with creating the animation that I intended to use as a simple proof of concept to show during my translations show presentation that had been moved from the following Monday to the coming Friday. And then my portable HDD decided to become unreadable…

My tutor asked whether the technical nature of a work can be its content and then concluded it couldn’t, likening the second sequence to Star Wars expressing a detrimental effect on the work.

I went home intent to work hard that night and change my work… and my computer failed to start again, the symptoms were different this time but I later found out the solution was the same.

Being told that my work had no content made me angry, so I decided that I would change it all, scrap the old idea and make something with a more obvious meaning (more obvious than the simulacrum created by two images making themselves), something deep… really deep, like Deep Space Object deep. Like generating terrains from images of deep space objects.

So here’s an image of the cosmic web.

And here’s a terrain based on that image, not that you could really tell… it’s rather too complicated an image to translate particularly well.

Now to try with an image of the darling Milky Way.

A lovely mountain range is formed, all those pixel-based gradients creating stepped hills at the feet of the mountains.

Here it is again but with a different set of shaders and the sun in the wrong place.

Now to try for something different, an optical illusion was suggested to me, but none seemed really as though they’re create an interesting terrain until I came across this…

A bit of blurring, some water and shaders later and these lovely geometric islands pop into existence.

I think they’re rather reminiscent of the chocolate hills in Bohol, Phillippines: 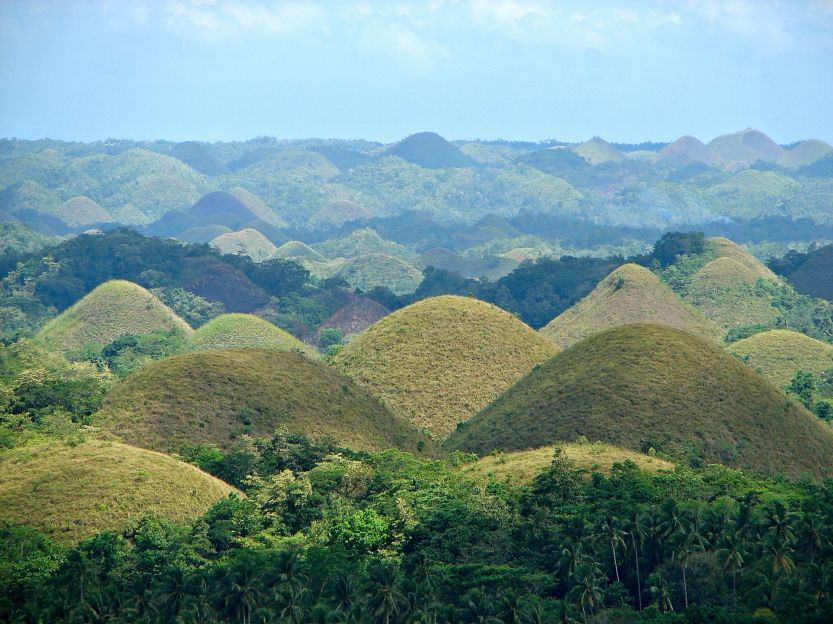 What a difference a 15 minute render makes.

The image of the crab nebula mapped onto the terrain created by the Pleiades (above).

The Crab Nebula being mapped onto the terrain created from it isn’t as interesting as when it’s on another star system.

This image shows the terrain created from an image of the Horsehead Nebula, with the original image mapped onto it.

These final images are still taken from varying points within one of the animations being created for my new idea – an Interstellar Travel Brochure video. These were made in an attempt to see how best they look under what settings of atmosphere.