After my tutorial, I decided that it was to be my course of action to try to create some environments within the Source engine (a game engine created by Valve for games such as Half Life 2, Counter Strike: Source, Portal) and the hammer editor. I knew that the source engine was good for creating maps that are full of blocky shapes, which is fine for my needs, most of the stuff I enjoy being primarily oblong and made of rectangles. 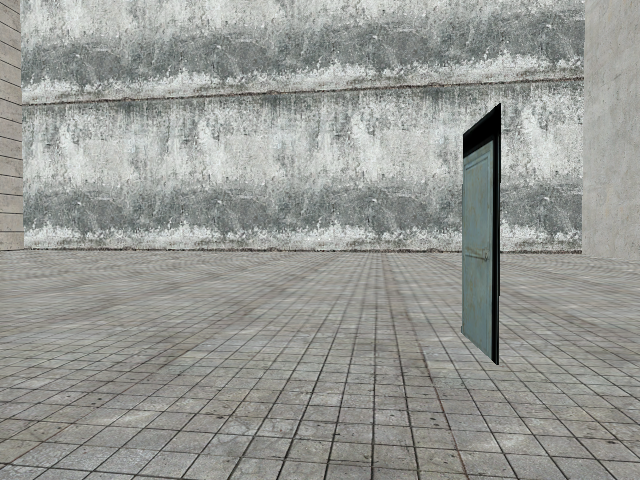 For my first test, I just created a tall room of four walls and a floor. This is basically as simple as it gets, I played around with textures a little to see how the browsing, scaling and placing systems worked.

Then for fun I decided to try creating a door. This door is terrible, after creating the flat brush (block), I applied a texture that looked like a door, made it a func_door_rotating entity, stepped back and ran the map. What occurred when opening the door in game was remarkable, the whole entity span 270 degrees and moved slightly across the floor, and back again when closing. Every journey has its first steps. 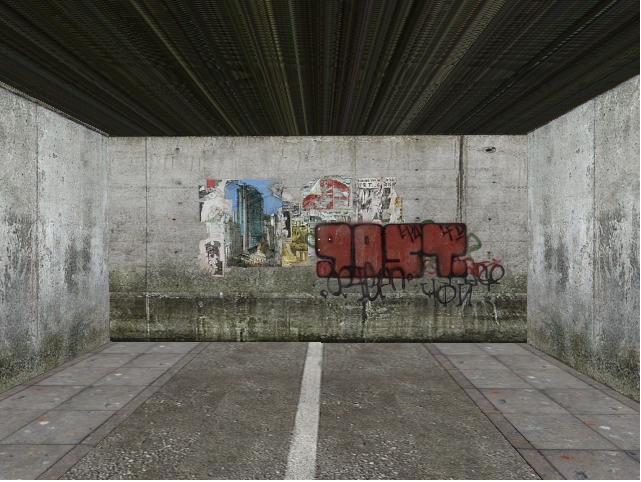 Immediately, there is a difference seen here. The brushes are more purposed and so more textures have been used to create a recognisable space. I played around with decals to create the graffiti for some fun.

However the most interesting thing I found out about was leaking and the void. The void is essentially the nothing-space that surrounds the map. A leak is when the void is visible to the player. Now what has happened here is that because I didn’t create a ceiling or what is known as a skybox, the whole sky was just one great leak, which manifested itself in this awesome glitch, whereby the renderer grabs what is physically in the space and then drags that along to fill the void.

I had some fun with this.

At the end of my street I decided to create a sort of hidden door. This time however, I did not use the func_door_rotating entity type, rather just the simple func_door type which creates a sliding door. Since I had disguised this door as yet another concrete panel I thought this sliding mechanic was rather fitting of a hidden entrance way. 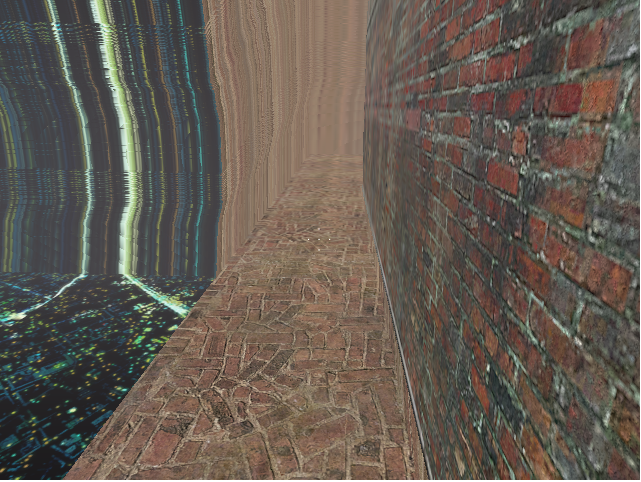 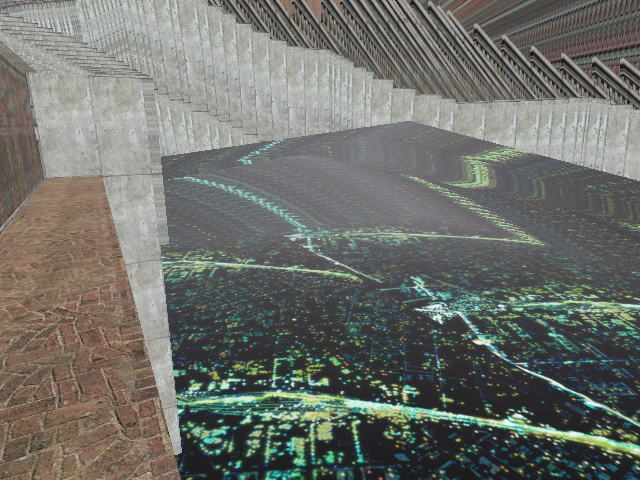 This floor was an attempt to make it look like a city below, it was just a texture i found. Again, this is an issue that practice with a skybox would solve.

The next few images are little paintings almost is the way i see them. They are created by exploiting the void glitch and wobbling the mouse around effectively, but it produces nice results and interesting ways of showing off the creations. 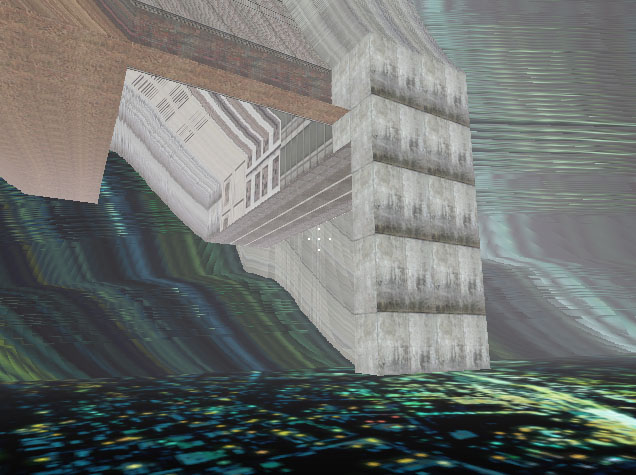 This next creation was a look at creating a block of flats, I was hoping this would be simple, as all I’d need do would be to create a single decorated and completed flat as a module and then copy and paste it to my heart’s content. 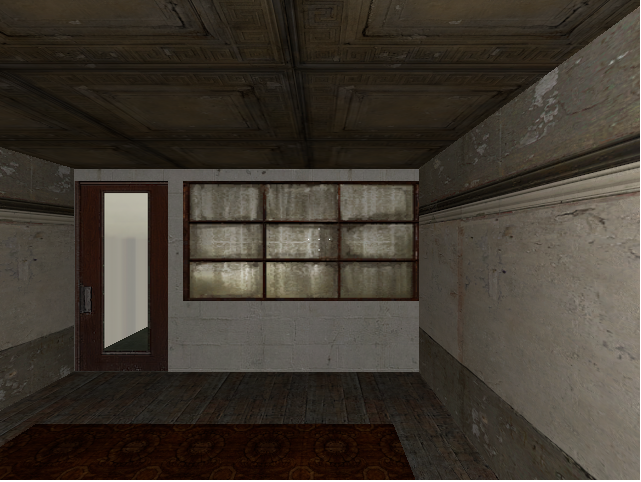 I created two apartments after deciding the moduling to check if the copy-pasting would work as I desired. The textures on this apartment aren’t quite right because I scaled everything up and only rescaled the textures on the other apartment. 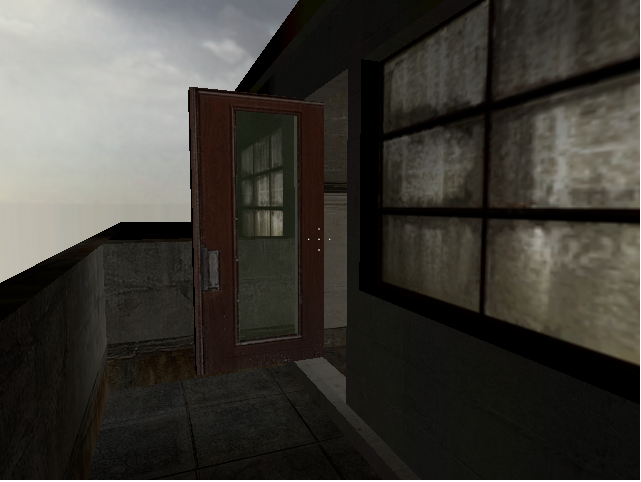 A bannister. This was rather tricky trying to get the textures to work with the brush shapes. Little did I know that there are prop bannisters that I could have just used instead which are complete models rather than textures with invisible bits appearing to be ultra thin bannisters.

More models and playing around with lighting. Whereas elsewhere I have used the light entity type, here I used light_spot which gives a more realistic directed light which was perfect for the lamp. I attempted to use light_spot’s for wall lights, and example can be seen to the left, my reasoning was that it’d point up at the ceiling as the prop is directed, but something about it was not liked and it never worked whilst I was still interested in this project.

Using a prop door means an actual door with a turning handle and everything rather than just a flat textured panel.

Having watched more tutorials on lighting and texturing, I felt like I could now make a much more interesting attempt to use this kind of architectural construction for an arty purpose, to give a meaning to it.

We start in a dark corridor, a sloping roof meets the ground behind you and leads you towards the light in front. 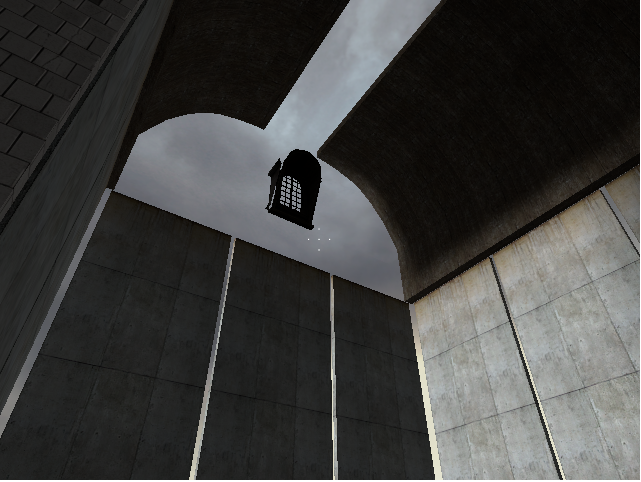 We are met by a concrete panelled barn, slits allowing light through but not a person, a floating ceiling and floating mismatched model arched windows hang above, reflecting the space they occupy.

A larger than usual slit allows us to escape the structure and view it from the outside.

At the top we come across a small scene.

A chair laid out with a lamp, bottle of wine and a mirror floating above a round carpet reflecting the sitter.

It’s an actual functioning mirror too, however there is no loaded player model involved in half life so I am not visible.

This map involved the use of the light_environment entity as well as the func_reflectiveglass entity and many prop entities. I am happy with my progress and shall continue to create more complicated maps. I still see them as paintings almost, though I feel under fewer constraints and freer in this digital world than I do when painting physically. Perhaps it is due to things being there for a reason in the digital world, I had to specifically place something there and that I guess allows me to create things on whimsy, without thought, because it will be looked at and read into anyway. On the flip side, with a painting, I feel there is an imperative to put something meaningful on the canvas because people expect it there.