During and after the In the Far Future show, I began to work much more on Unity to learn how to use the game engine to be able to create the architecture and experiences I wanted in my work. I made my first efforts at using textures and importing from Maya with the towers I had created.

“One day whilst working at uni, I was asked by Andrew Hart, a fellow student, if I wanted to be in a show he was going to put on in the morgue. As I didn’t really have anything worth showing, he suggested I simply do my work in the space and DJ a bit. So I did that, and I’m on the poster and here are some pictures, but I wouldn’t exactly call my performance ‘Art’, and by art I mean the Joseph Kosuth tautology -this is art because I the artist say it is- or rather, for me sitting awkwardly angled down at a laptop barely making any progress and really needing to watch a tutorial but spending time messing around may be a common activity of my work-time, however it isn’t art because I say it isn’t.”  (https://robinlevertonart.wordpress.com/2016/03/18/update/)

During the a briefing about the end of year show ad the spaces that would be available, I remembered an idea Dan Rowan-Smith had had about building a garden and upon hearing that CG03 had been used by only two students the year before, I saw it as an opportunity for us to try and make something large scale and ambitious. I measured the room and came up with this design for a walled garden with yellow cloth overhead to mimic sunlight – an idea used by Strindbergs Intima Teater in Stockholm.

The garden would be a calm space to transport a viewer away from the rest of the show and the college and to help them relax. I used unity to help plan and visualise the space. This introduced me to using the cloth component and lighting. I was also using Maya to create my own models for the garden. I really liked the striped effect on the walls; this is as a result of the lighting, when I widened the lighting angle to the maximum 179 degrees.

Dan wasn’t keen on the walls as it would take a lot of work and cost quite much, we had wanted this to be a relatively simple idea to execute. I then began working on the second iteration of the design, with the same layout, but no walls, to mark where one was meant to walk we decided to create a path with stone slabs. These were to be lit from underneath by LED strip lights, and the garden would receive soft light from lamps Dan would make with mason jars and inflatables. 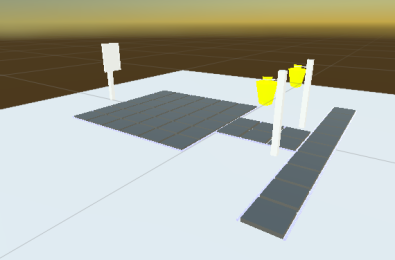 It was the intention that within the physical garden in CG03, there would be two projections showing Dan’s films and a monitor that would be displaying a video game piece of mine. For the strip lighting and the lamps, I needed to create materials that looked like they were emanating light. This led me to playing around with the emission setting on the materials editor. The use of the emission is unsettling as it gives the appearance of a glow but without the object actually emanating light that affects other shadows in the world.

At the Hoyeon Kang show “How to Shout Yahoo!” at the Korean Cultural Centre, the work “Campfire” (2015-work in progress) really resonated with me. The piece was very self-explanatory in what it wished the viewer to do – to relax against one of the rolled up carpets, facing the “campfire” (A humidifier lit by orange bulbs) as the sound of the sea (electric appliances creating white noise) ushers in calm. This implied invitation for relaxation is something I want to promote within my work. To lower the entry requirement of art and stimulate conversation between the people experiencing it about what they are experiencing.

I created a more detailed version of the garden with a raised path on a wooden frame that would hold gutting to act as a water rill following the path around. I did more detailed 3d modelling for this and added normal maps to my textures, which I had learnt from Alejandro Escobar in the CCW Digital, Virtual Reality Group sessions. Now able to create texture maps with the program CrazyBump, I could more easily add detail to my models.

It was at this point that Dan decided to drop out of our collaboration as he didn’t feel he could afford it or deal with the stress it was creating.

I didn’t want all of the work I had done up to this point to go to waste, but had no way of building the garden if it was just my work. I went around Tate Britain, spending a lot of time with Pablo Bronstein’s dancers and decided to somehow conjoin the proposal for the real garden with the video-game work. To show what we would have done with the space and why we were unable to do that. For this I had to create a much more accurate version of CG03. This is the first version with the more detailed walls and a floor texture.

I was now used to unity as a tool and had the ability to build whatever I needed to support my ideas, so my impetus changed to the interaction a user has with the world. The first example I came across was the garden chair I had used in my earlier model. I had decided that this would be my link to the real world and what the user would be sitting on to play the game. This required me to become familiar with coding in c#, the main language, along with Unityscript that Unity uses. I watched tutorials on Lynda, YouTube and the Unity tutorials website and the Unity Answers page to help me learn how to write the code I needed.

I learnt that I could use a raycast, fired from the player’s camera, to identify an object within a certain distance in order to interact with it. I used this to call upon a script that was attached to the object that would then do the desired action. In the case of picking up the chair, this was to move the chair to a point in front of the player and to make it a child of the player camera.

After I had managed to allow the player to pick up the chair, I wanted them to be able to sit on it too. This meant transforming the player rather than the chair. To achieve this I translated the player to a point on top of the chair as I had done the other way around. However, the player was unaffected, still the same height and able to walk away and I needed to disable this. This meant I had to call on a variable in the prefab “FPS Controller” script. I changed the walk speed when sitting to be 0 and made the player halve in size in order to appear to be sitting.

When it came to building the actual map, I had wanted to use a narrator to add humour and narrative to the gameplay and have element instantiate themselves when needed. The time taken to get the coding to this point had meant that these features couldn’t yet be added. As such I segmented the story I wanted to tell into planning the garden, represented by the room with supplies; the visualisation of the garden as a model as I had been doing in initially planning the physical garden out in Unity; the cancellation of the collaboration, shown by the text message on the wall; and an ideal garden situation which has a larger layout with more chairs and an additional projection.

This ideal garden was also going to represent the thought process in changing the idea from the physical garden to effectively elevate the proposal to being the piece itself. The video shown is one I took of Pablo Bronstein’s “Historical Dances in an Antique Setting” in Tate Britain. I had gone there to look for inspiration or something akin to it. I was captivated by the dancing and is weird drawings on the floor and odd rhythms but after staring at a Stanley Spencer, some Constables (Comfortable amongst Turners) and missing “Three Studies for Figures at the Base of a Crucifixion” a favourite Bacon of mine, I found the dancing to be what I needed and recorded them.